Interior of the Year: Black Cant System by An Design

Black Cant System by An Design named World Interior of the Year at INSIDE Festival of Interiors 2016.

The winning interior was created for fashion brand Heike, and is situated on the suburban outskirts of Shanghai, China. The concept is a store hidden in the shadows, unassumingly tucked away on the second floor of a furniture store. The boldness of the glum, all-grey interior struck judges as “a project that challenges conventional ideas about a retail fashion store”. 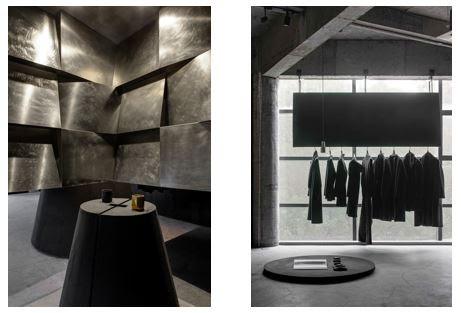 The bare concrete shell of the store houses brutalist black steel, dark timber and touches of silver that combine to form a space that feels dystopian, raw and futuristic. A staircase within the middle of the store leads shoppers to a large black wedge volume at the top.

The design houses a fitting room, storage, cash register and clothing display area, and in addition a small bar to create a space for socialising as well as shopping. Mesh-clad windows and backlit glass panelling add to the moody atmosphere, complementing the utilitarian aesthetic of the clothing.

The INSIDE World Interior of the Year award was judged by INSIDE festival’s 2016 super-jurors - Clive Wilkinson, Jurgen Mayer, Seyhan Ozdemir and Philip Handford. They commented: “Faced with a divided space, the designers inserted a black canted cube over the existing central stair, and effectively absorbed the programmatic elements into a poetic and sculptural whole. The store brand and architectural image work in harmony, with a sensitivity to surface and details.” 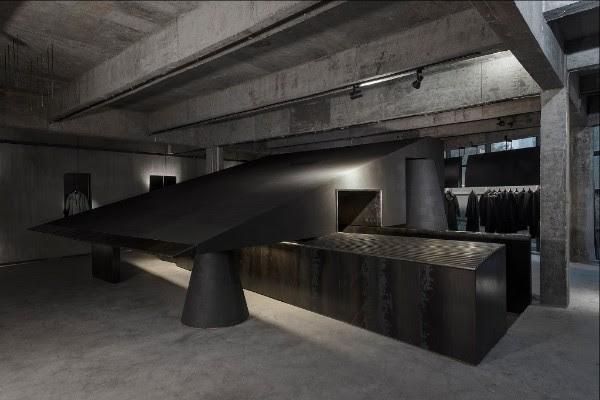 The winners were presented with their award tonight at the finale of the INSIDE - World Festival of Interiors, a gala dinner held at the Postbahnhof, the former central station of East Berlin.

INSIDE World Festival of Interiors is co-located with the World Festival of Architecture and together they form the largest celebration of contemporary architecture and design in the world. In 2016, the festival has taken place in Berlin for the first time, and organisers have announced that INSIDE will return to the Arena Berlin next year for the sixth edition of the festival.